Powerless Over Poverty in the New Orleans Recovery District 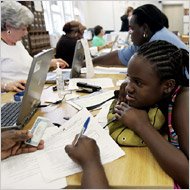 (Photo from NY Times). In the aftermath of Katrina, the re-building effort, such as it is, reflects an underlying strategy of discouraging as many poor and working class blacks from returning to New Orleans as possible. Many Garden District conservatives foresse a new New Orleans, much whiter, more prosperous, and retaining the cultures of New Orleans only within the controlled confines of a Disneyland version of the Big Easy.

Many whites, including School Board Chair, Phyllis Landrieu, spend their days thanking Katrina for making possible a new charter school system based on exclusion, white privilege, and segregation. The academically-weak, the disabled, and the poor are now shunted into what is ironically termed the Recovery School District. Like a bad 12-step program to which the poor kids of New Orleans have been sentenced for being black, the Recovery District, nonetheless, is based on wresting an admission by its enrollees that they are powerless over the conditions that have turned their world into a vortex of despair.

Some clips from today's New York Times story on the continuing effort to turn back the calendar on social progress:

Ms. Smith said the school her sister, now a 10th grader, attended before Hurricane Katrina — one of just five the city is still operating — turned her away because of poor grades. Two other options were full.

“Why am I still sitting here begging to get a child into school?” Ms. Smith asked at a registration center teeming with confused and angry parents. Many saw their schools disappear with the storm, replaced by a small but labyrinthine system of state, city and charter-operated schools, each with its own rules, applications and starting dates.

. . . .The state began interviewing and hiring the hundreds of teachers needed for its Recovery schools only about a month ago. It has about 60 percent of the teachers it will need on Sept. 7, when 8,000 students are expected for the first day of school.

Compounding the problem, the district, with 17 schools, has only 10 administrative staff members, and they are not yet working in permanent offices. In addition, the district has said that at least one storm-damaged school building will not be ready before classes begin, and others face the same risk.

While the state was working on its district, several local and national groups began creating charter schools, a system within a system that has grown to the largest group of charter schools in the nation. This fall, 33 of the schools are scheduled to open, receiving public money but operated by independent groups.

. . . . Some charter schools, however, have admissions requirements or the authority to reject students for a variety of reasons, the most common being lack of space. In addition, four of the five city-run schools have selective admission policies, based on academic and other factors. Students who cannot find a spot in a charter or city school will have to turn to the Recovery District, which is obligated to create space. “We’ve created the most balkanized school system in North America,” said Lance Hill, director of the Southern Institute for Education and Research at Tulane University. “The average parent is mystified.”

Many reserve their harshest criticism for the Recovery District.

“It seems to me that the whole Recovery thing is hype,” said Jerome Smith, the longtime director of a community center in the Tremé neighborhood. “Here you have people, supposedly professionals, who don’t have teachers for the schools, and at the same time have not prepared well for this transition. They are going to be excused for their professional shortcomings, but the children will be penalized forever.”

Belden Banks said his 17-year-old niece wanted to drop out of the 12th grade last week after having registration problems at Clark High School. She was told she needed to bring a legal guardian, but she does not have one. The teenager has been separated from her displaced parents since the storm, Mr. Banks said.

“They should have made sure kids didn’t have any of these problems because they’ve been through so much already,” he said. “Just a few more classes until graduation, and now she’s all upset and wants to quit.”

He continued: “If they turn kids away, guess where they’re going to end up? On the corner. You hear about it when they get killed.”

Thank you, Katrina. Thank you from the center of my heart of stone.