Spellings' Commission on Higher Ed: Bring On the Clowns 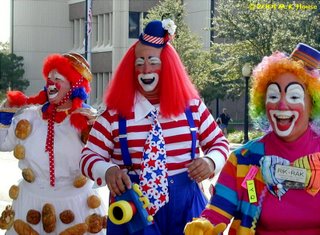 Spellings' Commission on the Future of Higher Education presented a final draft yesterday with great fanfare as panelists spent much of the final meeting patting themselves on the back in front of the C-Span crew and reporters.

The Commission's task was to make recommendations on how colleges and universities can be held accountable for maintaining the United States' competitive edge in the global economy. This important work is being done on the heels of federal cutbacks in student loan programs, state cuts for public universities, skyrocketing tuition costs and shrinking local school budgets across the country.

The problem with higher education appears to that old school independent, critical thinking stuff that gets in the way of the corporate socialist efficiency model that is fueled by an out-of -control ed testing industry. With teaching to the test now standard best practice in K-12 as a result of NCLB, college students should be well prepared to fill in the advanced bubble sheets at university. Sounds like a plan that could only be offered up by the Chuck Miller and the other dunces with no shame. 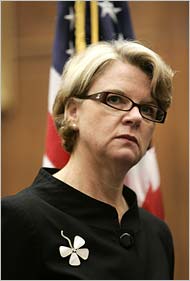 Although 18 members of the panel signed the document, there was one party pooper who spoiled little Margaret's fun by refusing to put his rubber stamp of approval on what he fears might be a report that is generating a false sense of crisis and is one-sided:

This report from ePluribus Media explains why one member of the commission refused to sign the document:

Okay, it is official; the Commission on the Future of Higher Education has adopted a final report on what they believe needs to be done about higher education’s “unwarranted complacency.” Notably, David Ward, President of the American Council on Education, stood alone in not signing on, citing the report’s one-sidedness in attributing the problems facing higher education “entirely to the limitations of higher education.” Ward, who was a vocal critic of the Commission’s harsh first draft, was more tempered in his response to the final report.

Ward states:
The recommendations as a whole also fail to recognize the diversity of missions within higher education and the need to be cautious about policies and standards based on a one-size-fits-all approach. Beyond my disagreement over some recommendations, it is in the end my belief that our solutions should be built upon the strengths of higher education rather than on inferences that could project a false sense of crisis. I would have preferred more emphasis on “best practices” both in public policies and in the conduct of higher education.

For more news flashes on the "urgent reform" needed to save higher ed and America's place in the global economy, just step right up and see the greatest scam on earth.