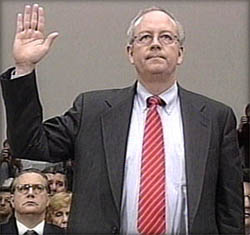 I wonder who's really paying the tab for this. Maybe a discretionary grant from ED?:

Starr, who gained national prominence while investigating former President Clinton's Whitewater land deal and relationship with Monica Lewinsky, filed the petition Monday on behalf of the Juneau School District in response to a March ruling by the 9th U.S. Circuit Court of Appeals.

The U.S. Supreme Court petition must receive a minimum of four of the nine justices' votes to be heard.

Frederick, then a senior, was off school property when he hoisted the banner but was suspended for violating the school's policy of promoting illegal substances at a school-sanctioned event.

"The principal's actions were so outrageous, basically leaving school grounds and punishing a student for a message that is not damaging to the school," said his attorney, Doug Mertz.

Superintendent Peggy Cowan said clarification is needed on the rights of administrators when it comes to disciplinary action of students who break the district's drug message policy.

The outcome could have implications on how student-conduct policies are enforced around the nation, said Eric Hagen, one of two other attorneys from Starr's office named on the petition.

"It makes it a little harder when teachers and principals in their daily duties might be subject to a damages lawsuit and be held personally liable," Hagen said.