Christian Reconstructionists: The Heresy of Democracy and the Satanic Public Schools 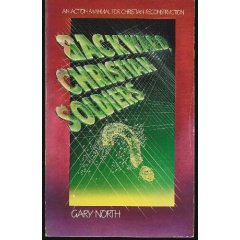 Here are some clips from a report on a big summer shindig down in Georgia called the Worldview Summer Conference 2006. Ever wonder what inspires the crusader zeal of the ED cons to crush public schools? Besides the ed industry lobbyists, I mean:

Two really devilish guys materialized in Toccoa, Ga., last month to harangue 600 true believers on the gospel of a thoroughly theocratic America. Along with lesser lights of the religious far right who spoke at American Vision's "Worldview Super Conference 2006," Herb Titus and Gary North called for nothing short of the overthrow of the United States of America.

Titus and North aren't household names. But Titus, former dean of TV preacher Pat Robertson's Regent University law school, has led the legal battle to plant the Ten Commandants in county courthouses across the nation. North, an apostle of the creed called Christian Reconstructionism, is one of the most influential elders of American fundamentalism. . . .

At the heart of what was taught by a succession of speakers:

Education earned the most vitriol at the conference. Effusing that the Religious Right has captured politics and much of the media, North proclaimed: "The only thing they (secularists) have still got a grip on is the university system." Academic doctorates, he contended, are a conspiracy fomented by the Rockefeller family. All academic programs (except, he said, engineering) are now dominated by secularists and Darwinists.

"Marxists in the English departments!" he ranted. "Close every public school in America!"

Among North's most quoted writings was this ditty from 1982: "[W]e must use the doctrine of religious liberty to gain independence for Christian schools until we train up a generation...which finally denies the religious liberty of the enemies of God." Titus followed that party line when he proclaimed that the First Amendment is limited to guaranteeing "the right to criticize the government," but "free expression is not in the Constitution." When I asked him if blasphemy -- castigating religion -- was protected, he shook his head.

Like North, Titus sees public education as decidedly satanic. Also, welfare. He contended the Founding Fathers -- and Americans today -- owe their "first duties to God. It's not just worship. It's education... welfare to the poor. Welfare belongs exclusively to God. Why do schools fail? They're trying to do the business of God. Medicaid goes. Education goes. The church gets back to doing what it should do." And what should the church be doing According to these self-appointed arbiters of God's will, running our lives. And stoning those who disagree. . . .

It would be easy to dismiss the Reconstructionists as the lunatic fringe, no more worrisome than the remnants of the Prohibition Party. But, in fact, they have rather extraordinary entrée and influence with top-tier Religious Right leaders and institutions.

James Dobson's Focus on the Family is now selling DeMar's book, America's Christian Heritage. Dobson himself has a warm relationship with many in the movement, and he has admitted voting for Reconstructionist presidential candidate Howard Phillips in 1996.

Southern Baptist Bruce N. Shortt is aggressively pushing his denomination to officially repudiate public education and call on Southern Baptists to withdraw their children from public schools. Shortt's vicious book, The Harsh Truth about Public Schools, was published by the Reconstructionist Chalcedon Foundation.

There are big theological differences between the Religious Right's generals and the Reconstructionists. Traditional Christian theology teaches that history will muddle along until Jesus' Second Coming. That teaching is tough to turn into a political movement. Reconstructionists preach that the nation and the world must come under Christian "dominion" (as they define it) before Christ's return -- a wonderful theology to promote global conquest.

In short, Dobson, Robertson, Falwell and the Southern Baptist Convention (the nation's largest Protestant denomination) may not agree with everything the Reconstructionists advocate, but they sure don't seem to mind hanging out with this openly theocratic, anti-democratic crowd.

It's enough for Americans who believe in personal freedom and religious liberty to get worried about -- before the first stones start flying.