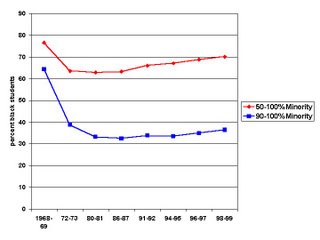 In 1954 Justice Warren, speaking for a unanimous Supreme Court, declared that separate schools are inherently unequal. "Impeach Warren" signs sprang up around the South, but all the racist protests were not enough to stem the tide toward integrated schools, which the 1964 Civil Rights Act cemented. Even so, the Civil Rights Project found in 2001 found that 40% of black students still attended schools where blacks constituted 90% of the school population and that 70% of black students attended majority minority schools. (Chart from Orfield study, 2001)

The road to an integrated society remains one of our greatest challenges, and those school districts that have policies in place to encourage integration should serve as models. That is why it is particularly disturbing to see the federal government, led by the Bush White House, joining those who would turn the Brown decision on its head by arguing that school policies aimed toward integration are discriminatory. This is the same White House that uses a feigned concern for minorities to push a failed NCLB education policy aimed at dismantling public schools. This L. A. Times provides the story, "Bush Administration Opposes Integration Plans." Here is a clip:

WASHINGTON — The Bush administration has urged the Supreme Court to strike down voluntary school integration programs across the nation that exclude some students because of their race. Administration lawyers filed briefs this week in pending cases from Seattle and Louisville, Ky., on the side of white parents who are challenging "racial balancing" programs as unconstitutional. The parents say the integration guidelines amount to racial discrimination and violate the Constitution's guarantee of the equal protection of the laws. They lost in the lower courts, but the Supreme Court will hear their appeals in the fall. In the briefs, U.S. Solicitor General Paul D. Clement urged the justices to rule that "the use of a racial classification to achieve a desired racial balance in public schools" is just as unconstitutional as old-fashioned racial segregation.. . .

The recently-packed Supreme Court will hear the case this Fall. I would say it is time for new impeachment signs all across America!
at 7:09 PM