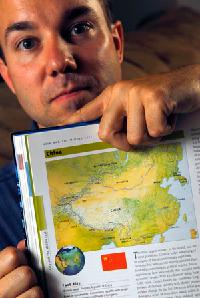 A seventh-grade geography teacher who refused to remove Chinese, Mexican and United Nations flags from his classroom was placed on paid administrative leave Wednesday by Jefferson County officials who were concerned that the display violates the law.

District officials said state law forbids the display of foreign flags unless they are temporary and related to the curriculum.

Carmody Middle School principal John Schalk looked at the curriculum for Eric Hamlin's world geography class "and there was nothing ... related to any of these countries," said Lynn Setzer, district spokeswoman.

She said Schalk asked the teacher three times to remove the flags and warned there would be consequences, but Hamlin refused.

Hamlin, in his first year at Carmody, said he regularly displays flags from different countries, rotating them out based on countries being studied.

He said that the first six weeks of school are devoted to discussing the "fundamentals of geography" and that the flags were randomly selected.

District officials are citing Colorado Revised Statute 18-11- 205. It says: "Any person who displays any flag other than the flag of the United States of America or the state of Colorado or any of its subdivisions, agencies or institutions upon any state, county, municipal or other public building or adjacent grounds within this state commits a class 1 petty offense."

It says an exception to that law is "the display of any flag ... that is part of a temporary display of any instructional or historical materials not permanently affixed or attached to any part of the buildings ... ."

Mark Silverstein, an attorney with the American Civil Liberties Union, said he didn't see how the statute applied to this situation.

District Superintendent Cindy Stevenson said the district has contacted Hamlin and is trying to resolve the issue.

"We have not heard back," she said.

She said Hamlin could have complied with the principal's request and then followed policies that allow him to appeal.

The punishment for insubordination could range from a reprimand to dismissal, Setzer said.

Hamlin said he was in his classroom Monday when an assistant principal came in, saw the flags and told him they needed to be removed.

Hamlin said there is an American flag stationed permanently in the classroom.

He said he believes school officials are being extra cautious because of a controversy at Denver's North High School when a Mexican flag was hung by a social studies teacher and people complained.