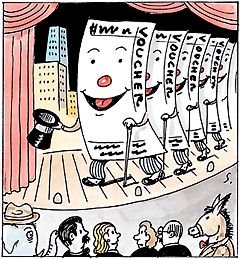 To trust Dr. Paul Peterson's judgment on the veracity of a research study that challenges the rationale for vouchers is equivalent to asking Don Rumsfeld to plan the future agenda for Amnesty International.

Harvard's Paul Peterson got serious in his propagandizing for vouchers in 2000, when he presented a manipulated and biased account of research data to show academic advantage, when there was none, for minority students attending voucher schools . Not long after the release, Mathematica Policy Research, a partner in that study that Peterson cooked, took the unprecedented step of going public to protest the manipulation. Since then other critics have come forward to criticize Peterson's methods and to put him in the category of unabashed ideologue where he belongs. Here is a copy of the amicus brief (pdf here) filed in the Florida voucher case in 2005 by opponents of the program that summarizes some of the shortcomings in Peterson's manipulations.

All that, however, has not stopped the education privatizers from choosing Peterson once again as their go-to guy to offer up some more pro-voucher "research," this time to try to knock down the devastating study conducted by ETS for ED, recently released to show that privates do no better than publics, when scores are adjusted to take into account students' family incomes.

Did I mention that Peterson serves on a "Department of Education independent review panel to advise the agency in evaluating the No Child Left Behind Act?" Just the kind of independent review that has placed good science and good sense in the toilet in favor of a bankrupt ideology based on unrestrained greed and grounded by duplicity, deception, and good old-fashioned lies.
at 2:57 PM