A Half Decade of NCLB in California 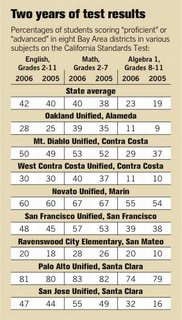 (Chart and story from San Francisco Chronicle). After a half decade of NCLB testing, and after the California state curriculum has been replaced by test preparation (at least in poor areas), and after all the fine, hollow rhetoric about closing the achievement gap has turned into a faint, feckless echo, and after thousands of the best teachers have quit rather than engage in educational child abuse, California is a full two-fifths of the way toward achieving the ludicrous NCLB mandate of 100% proficiency by 2014. In the meantime, the achievement gap remains the chasm that it was before all the stupidification by testing began.

One must wonder if the Jeb and Mike editorial team that took to the pages of WaPo last week represents an acknowledgement of the obvious, that staying the course with NCLB might soon be replaced by a new mantra, something like "adapt to win." It didn't take a seer to see that the reckless would likely turn feckless when push comes to shove in the upcoming re-authorization battle that will follow the November elections and the November state testing reports. The Jeb and Mike editorial (wouldn't that be a dream GOP presidential tag team?) represents one guise to buy a continuation of NCLB by offering the NAEP in all states to federalize testing and by using some form of growth model that will acknowledge improvement over time. This "compromise," of course, will be used as justification for a national student database in order to initiate such growth models. In short, a tightening of control by fewer and fewer and the hastening of the erosion of democratic institutions.

Adapt to win? Does that mean a new official line of lies issued in order to carry on the reform miracle turned to educational genocide--or a war turned into a series of war crimes?
at 5:52 PM