Faith-Based Initiatives: What Is Their Accountability Based On? 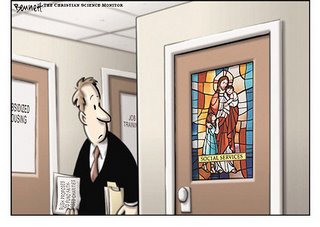 Bill Berkowitz reports on the GAO Report, early reported by Raw Story, that sharply criticizes the implementation of Faith-Based Initiatives, Bush's attempts to shovel big piles of the federal treasury into the giving plates of his fundamentalist followers. According to the GAO, any citizen looking for evidence that these faith-based programs are functioning as effective means to non-sectarian social ends will find scant evidence, but must depend upon, well, faith.

Compare this lack of oversight or accountability meaures for the religious money managers to the omnipresent prying gaze of the Reading First program police, always on alert to make sure that schools aren't deviating from the script that they have been pressured into buying.

From Berkowitz at Media Transparency:

"I am confident that the faith community is achieving unbelievable successes in -- throughout our country." -- President George W. Bush, second White House National Conference on Faith-Based and Community Initiatives, March 2006

For years, President Bush has being going around the country touting his faith based initiative (FBI), claiming that it has been achieving remarkable results delivering social services to the needy. Few reporters have bothered to ask what the president meant by "results." Well, the results are in on the FBI and they are decidedly not positive. A new report from the Government Accountability Office (GAO) has affirmed what many critics of President Bush's faith based initiative have long asserted: too many religious groups that have received government grants have been mixing religious activities with their social work; and the government has not yet established a concrete process to monitor grant recipients to see if they are being effective.

The GAO study (pdf) entitled "Faith-Based and Community Initiative: Improvements in Monitoring Grantees and Measuring Performance Could Enhance Accountability" found that "While officials in all 26 FBOs [faith-based organizations receiving federal grants] that we visited said that they understood that federal funds cannot be used for inherently religious activities, a few FBOs described activities that appeared to violate this safeguard. Four of the 13 FBOs that provided voluntary religious activities did not separate in time or location some religious activities from federally funded program services." . . .