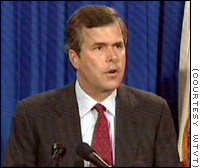 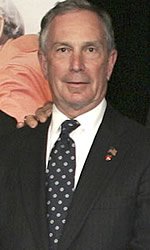 While Jeb Bush and Michael Bloomberg were touting the wonders of No Child Left Behind through a joint editorial in Sunday's Washington Post and how it's "Helping Our Students," teachers in Texas say they have had enough.

One of Texas’ largest teachers unions Tuesday called for an overhaul of standardized testing, saying the state’s emphasis on scores is “destructive” and takes away from students learning critical thinking and other essential skills.

“We are not turning out well-rounded students that can compete,” said Linda Bridges, president of the 52,000-member Texas Federation of Teachers. “Teachers are saying enough is enough and it is really time to bring back sanity to all of this.”

Now for some more Orwellian chutzpah from the know-nothing party:

How to Help Our Students
Building on the 'No Child' Law
By Jeb Bush and Michael R. BloombergSunday, August 13, 2006

The No Child Left Behind Act of 2001 sent an enormously important message to politicians and educators across America: Stop making excuses for low student achievement and start holding your schools accountable for results.

Florida and New York City are leaders when it comes to accountability in education. We have set high expectations for all students, and in key grades we have eliminated social promotion, the harmful practice of pushing unprepared students ahead. We grade schools based on student performance and growth so that parents and the public, as well as school administrators, know which schools are working well and which are not. Our emphasis on accountability is a big reason our schools are improving, our students are performing at higher levels and we're closing the achievement gap between poor and minority students and their peers.

The huge disconnect between the empty rhetoric of failed policies and realities on the ground (not limited to the War in Iraq) is becoming increasingly clear. The disconnect will shape and characterize the upcoming battle over NCLB as Republicans and Democrats begin to stake out their positions.

It's time for parents and teachers to stand up and send a strong message to any politican who believes NCLB is worth building on that they are living in a fantasy world. It is time for those who really want to help students to begin holding politicians accountable for destroying the hearts and minds of the next generation.