This piece from The Raw Story gives the lowdown on a new disinfo-mercial by Coral Ridge Ministries that is bound to wow the Dobson crowd and other right-wing conservatives who read the Grand Beldame, Ann Coulter, for an understanding of Darwin's place in history.

Don't miss this film clip preview from "Darwin's Deadly Legacy" that will be seen on some Fox channels later this month. Check your local listings today!

A clip from Raw Story:

"To put it simply, no Darwin, no Hitler," says Dr. Kennedy. "Hitler tried to speed up evolution, to help it along, and millions suffered and died in unspeakable ways because of it."

Central to this piece of propaganda is the ludicrously-false connection between evolutionary theory and the eugenics movement. The irony doubtlessly lost on these fundamentalist crackpots is that it was the early 20th Century's progressive clergy, both Protestant and Catholic ( and even some Jews), who gave the stamp of approval for the American eugenics movement. See Christine Rosen's Preaching Eugenics--and for a fuller treatment on the American eugenics movement and its embrace by prominent politicians, scientists, and philanthropists, see Edwin Black's War Against the Weak. 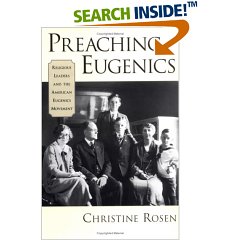