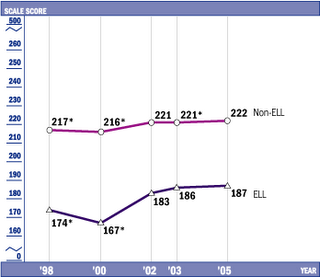 This year Arizona has tripled its number of failing schools. Credit can be given to insane NCLB requirements, which demand the inclusion of test scores for new immigrants, many of whom who do not speak English. This kind of thuggish requirement, which is not limited at all to Arizona, represents a blatant disregard for public schools, teachers, and the students who can't read the tests they are given. Here is part of the story from The Arizona Republic, which dispels the rumor that Spellings is a compromiser or has relaxed some of the harsher sanctions:

A record of more than 600 schools, or nearly three times as many as last year, failed to meet federal academic requirements, the state reported.

For the first time ever the state was forced to include AIMS test results in math and reading from students who are in their second or third year of learning English. That puts more schools on the road to potentially failing four years in a row and triggering state intervention into daily operations.

The contrast highlights a debate that is playing out among educators over how Arizona should measure its educational performance.

State officials want to exclude students in their first three years of language learning from the federal "adequate yearly progress" counts, expected to be released Friday. They also separate them from Arizona's annual ranking of schools and overall AIMS exit-exam results. They argue that including students still learning English skews the picture.

The U.S. Department of Education fears these children will not get the attention they need unless Arizona counts their test scores. Its theory: Who gets measured gets taught.

Horne sued the federal government in July to stop the inclusion of student test scores until their fourth year of English language classes. Until the suit is settled, the scores must be added. Adding test scores of kids who don't yet fully know English is impractical and idealistic, Horne says. It pushes the data downward, painting an unfairly negative picture of Arizona's education system.
"By saying a school has to fail if all their students are not proficient one year after coming here from Mexico, you make it impossible for schools to succeed," Horne said. "That destroys the incentive."