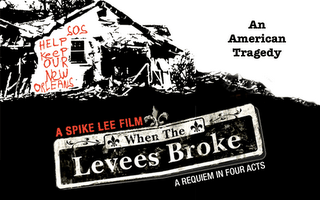 If you haven't seen Spike Lee's When the Levees Broke, check HBO for when it will be shown again.

Now as the real estate buzzards line up to devour the devastated and unrepaired properties a year after Katrina hit, so, too, are the corporate welfare EMOs standing by to take over the chartered school system. Just as FEMA has functioned to keep the clean-up at a snail's pace and, thus, discourage black homeowners from returning to the 9th and Lower 9th, political pressure and millions in charter seed money from BushCo. and ED have placed local public control of NOLA schools on the fast track for demolition. Never mind that all of this support for charters comes just as the ED research confirms earlier ED research shows charter schools no better than regular public school in raising test scores.

From the Christian Science Monitor (hat tip to ASCD NewsBrief):

Who should control New Orleans schools?

Before Katrina, New Orleans had 128 public schools. By September, 53 will have reopened. While some see the need to rebuild the system as a long-awaited opportunity for radical change, others say the very concept of a truly public, locally controlled education is being thrown out.

Parents face potentially bewildering choices: There are 31 autonomous charter schools, some monitored by the state and others by the local Orleans Parish School Board (OPSB). Only five schools are still operated directly by OPSB. Seventeen schools are run by the state-controlled Recovery School District (RSD). After Katrina, RSD's authority was expanded by the legislature so it could take control of schools that had performance scores below the state average, even if they were meeting yearly progress goals. That gave the state authority over more than 100 schools.

"Individual parents might say, 'Oh, this school looks a little better ... but public education has always been a local responsibility, and long term you need an engaged community," says Theresa Perry, a professor at Simmons College in Boston and part of the National Coalition for Quality Education in New Orleans.

That group and local critics say the state gave certified teachers a slap in the face when it dismissed them all after the storm and then made them reapply and take a new screening test. Meanwhile, many former teachers relocated or retired to be able to receive health insurance. Inequities will worsen, some observers say, because the schools serving the poorest children are the ones that were taken over by the state. These schools are experiencing delays and teacher shortages.

Tulane University President Scott Cowen, chair of the Education Committee of the Bring New Orleans Back Commission, says 70 percent of his group's blueprint has been followed so far. What's still needed over the coming years, he says, is a central governance system, a bigger investment in prekindergarten, more development of teachers and principals, and improved school facilities.