NCLB "In Need of Repeal" 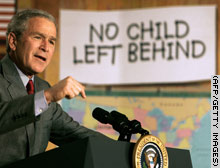 If the U. S. Congress instituted a military draft that included middle class children, the War on Iraq would be over in a matter of months. Parents and students just wouldn't accept it. We will now see if the same holds true when it comes to the war on public schools, as this year's test scores bring suburban schools into the mix of assured mass failure to meet the unachievable goal of NCLB to have all children at grade level in reading and math by 2014.

So as school watch lists begin to include suburban schools among the Federal failures, rather than just the poor brown ones that didn't warrant much of our attention during the past four years, we will see if parents and students are ready to say ENOUGH to the war on public education that is claiming hundreds of thousands of new casualties during each repeated testing campaign.

Here is a story from the Star-Ledger that will be repeated over and over and over again in every state of the Union this Fall. In my own adopted state of New Jersey, which has one of the best public education systems in the country, one in four schools failed in the last round of testing to make Adequate Yearly Progress under NCLB, a number that will increase unless NCLB is ended next year:

One in four New Jersey public schools failed last year to reach student test results required under the federal No Child Left Behind Act, with more than 50 schools now facing the law's toughest sanctions yet, according to the state.

Released yesterday by the state Department of Education, the 643 schools falling short in 2005-06 are an improvement from the previous year's total of more than 800 schools missing the mark. But officials stressed any comparison is difficult, due to technical changes in how the state identifies schools.

Either way, the law's sometimes-perplexing rules require schools to have two successful years to get off the lists, and that leaves more than 1,000 New Jersey schools opening next month with the unflattering label of either being in "early warning" or "in need of improvement."

Many sit in urban and working class districts that fare the worst under the law, which requires students reach certain proficiency levels each year. For instance, all but five of Paterson's schools were tagged with one sanction or another.

Newark has 60 schools either on the list of early warning or needing improvement, including eight that must make major organizational changes after six years of falling short, the law's penultimate penalty.

At least four of those are getting new principals, and others will see new grade structures or other reorganizations, district officials said. The district's teachers union has proposed taking one school under its own wing.

"In the last week, we've had lots of conversations around these eight schools," said superintendent Marion Bolden. "All of this is new to everybody."

Yet suburban districts are increasingly dealing with the controversial law's consequences as well, and those are sure to continue as the law's requirements ramp higher in coming years.

Piscataway has three middle schools at various junctures in the law's sanctions, two on the "early warning" list after falling short one year and one deemed in "need of improvement" after four years of missing the mark.

In most cases, superintendent Robert Copeland said that raising special education scores continues to be the greatest challenge under a law that demands students with disabilities do just as well as those without.

Copeland said he applauds that aim, but hopes the public looks beyond just the lists to see the progress being made in the district. . .

And the PDK/Gallup Poll shows that, indeed, the public beginning to understand that this war against their schools is of the same type as the one in Iraq: it is a war of choice rather than necessity, one whose purpose is to impose a right-wing conservative ideology that, in the war against schools, will establish a privatatized system and undercut the social progress and cultural understanding to which public school educators have contributed during past decades.

As the public begins to have a closer look at a policy that now theatens their own neighborhoods, rather than the ones on the six o'oclock news, the utter bankruptcy of this NCLB failed policy of mandated manipulation will become clearer and clearer. And yet, the Secretary of ED, just like her boss, continues in robot fashion to offer up bromides like this one from yesterday's speech that simply underscore the lost credibility of this entire Administration:

Thanks to this law [NCLB], we're now able to fine-tune the system to make sure that every child is learning—regardless of race, income-level, background, or ZIP code. And it's working!

And so is the deadly military adventure in Iraq.


Support our Troops--Bring Them Home,
Save our Schools--Leave The Testing Alone.