NCLB and Ideology of the Absurd 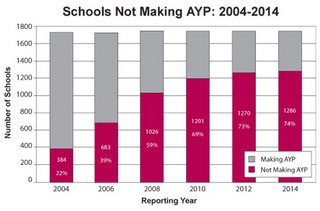 Here's a taste of Sunday's editorial from the Louisville Courier-Journal:

Even good ideas have limits, beyond which they turn absurd, destructive or both.

So it is with school accountability. The federal No Child Left Behind law has pushed a good idea -- setting ambitious standards and measuring schools' progress toward them -- well beyond its reasonable limits.

The result is that the nation is on the verge of becoming a Saturday Night Live version of Lake Wobegon: a place where, by official decree, all the schools are below average.

As the release last week of another round of bleak NCLB school ratings confirmed, even progress now counts as failure, and even good educators are deemed too bad to endure. . .